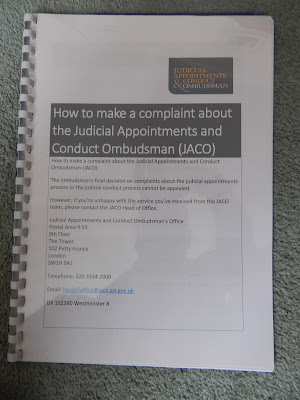 Judicial Appointments & Conduct Ombudsman will investigate.
4th August 2016
The Judicial Appointments & Conduct Ombudsman confirmed by telephone  today that it will investigate the Chamber President in regard to the decision that his office was investigating with the missing Planning Inspectors Report which was requested from the Council two and a half years ago and has still not been forthcoming .

The matter reached the First Tier Tribunal GRC & GRP Tribunal in January this year after a complaint was made to the ICO in regard to the Council holding or not holding this document from the Planning Inspectorate.  A twenty page report was sent to JACO the Communities and Local Government  Comittiee. and Ms Amber Rudd MP

"This was excellant news the chairman states as it was very kind of JACO to step in and help."

Mr Donald Wise of Hastings Badger Protection Society stated " I am totally ashamed that the Council has not produced what everyone was expecting to see."
Posted by Unknown at 09:35:00